Washington Institute Messengers for ALQaeda to The State Department


EXPOSED: Goon from the Washington Institute think tank acts as messenger boy for Al Qaeda to its supporters in the State Department. 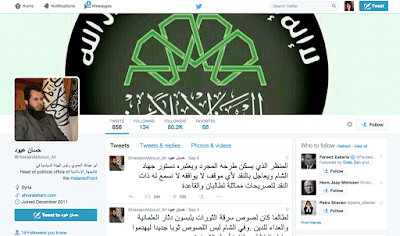 Washington Institute fellow Aaron Y.Zelin sent a private message through his twitter account @Azlan, to the leader of Al Qaeda of shoot Ahrar Al Sham, suggesting that he may help relay a message to his supporters in the US State Departement.


"Any personal message you want to send to the people in the state department who want to support you? I'm talking with them in the morning my time"

The Ahrar Al sham's leader answered with "My reply to your message will be in public", and followed through by leaking out the private message in a tweet. 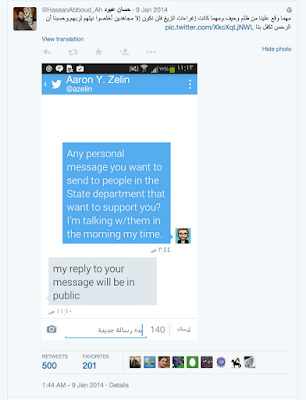 This tells us two things, first that there are people within the State Department that support ALQaeda and Zelin knows who they are. Secondly,think tanks like the Washington Institute , are acting as mouth pieces for Al Qaeda to stir up support in the US State Department.

This would not be the first time a think tank suggests that ALQaeda become the US's new best friend. In January 2014 the CFR wrote an article headlined " The good and Bad of Ahrar Al-Sham: An Al Qaeda-Linked Group Worth Befriending". But it is the first time an american analyst has shown his links and support for ALQaeda so directly, and exposed members of the State Department along with him.